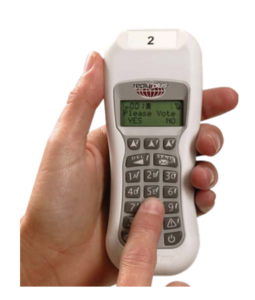 At Crowd Insight, we call our voting keypads just ‘keypads’. When we’re with our voting systems at meetings and events, we hear them given all sorts of names.

Here is a light hearted look at the most popular names given to our clever voting keypads. 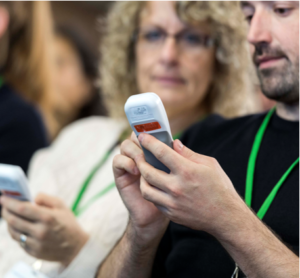 This a widely used term often heard in the Crowd Insight office for our voting keypads. We also hear it a lot at meetings and events by people in the AV (audio visual) industry. This is a good name that we’re comfortable with so feel free to use it as much as you like.

Just like voting keypads have never clicked, in the history of keypads- they have never buzzed either! The name ‘buzzers’ comes from the influence of TV game shows. We’ve all heard the quiz show host say ‘Fingers on the buzzers’. Crowd Insight audience response systems can actually record who has responded quickest to a quiz question. So the speed element is relevant.

A very popular alternative name for our voting keypads. Crowd Insight staff have been working with keypads since the late 90s. The funny thing is that all keypads we have worked with, none have never clicked!

So what is a clicker? If you look up ‘Clicker’ in Wikipedia, you would find several different meanings. These include dog training devices and handheld counting machines like the ones bouncers use to count people in and out of a club. The most intriguing clicker entry is this;

In World War II Clickers were used by Allied paratroopers preceding and during Operation Overlord as a way of covertly identifying friend from foe. A soldier would click once and if two clicks were received in return from an unidentifiable soldier then his identification was confirmed.

Another entry worth noting for clickers in Wikipedia is;

So we’re on the right track with game shows because our keypads are used all the time in quizzes. This could explain the popularity of the name.

I can quite understand how this name came about. Many parallels can be drawn between a delegate at a conference using a keypad and someone at home watching TV.

They are both sat on a chair, listening to someone and usually watching a screen. When the delegates are asked to vote/ respond, they pick up their keypad and press the corresponding number. Just like turning the channel over on the TV at home! In addition, what you press impacts what you see next!

This name is good because unlike other, it is logical. Delegates respond to questions using a keypad, so why not call them responders? After all, they are part of an audience response system. You could also argue that delegates themselves are responders too.

This is quite an unusual name for voting keypads but we still hear it at least a couple of times a year. Zapper isn’t quite as daft as it sounds. When someone with a keypad responds to an interactive question, they actually send a small package of data to the response system. This package includes their response, how long they took to answer, the individual identification number of their keypad, and the channel of their keypad.

You could call the sending of that data zapping. However, ‘zapping’ is a bit of a jokey sci-fi phrase you might hear on Doctor Who and just sounds a bit dated so we’re not over keen on this.

This is an abbreviation of ‘handheld keypad’. Handheld keypad is a decent description but is too long winded. If you going to lose one of those words, lose ‘handheld’ and just call them keypads!

Also, we work closely with AV companies. They always have handheld microphones as part of their kit. We wouldn’t wish to confuse matters by introducing another ‘handheld’ into the mix!

This is what they are referred to by the manufacturers and suppliers of audience response systems. It is a name that has been used in the industry since their invention in the 1990s. It is also how most AV technicians that we work alongside know them as.

This is definitely our go-to name and always will be!

Call yours what you want, but remember… keep those presentations interactive and your audience engaged

For more information on keypads (or clickers, buzzers etc) visit